The Causation and Spread of Epidemic Influenza

Prior to 1933, aetiological studies of human influenza yielded little precise information. In 1938 Shope showed that swine influenza, the analogous disease of pigs, was caused by a bacterium (Haemophilus influenzae suis) and a virus, in symbiosis. Two years later, Smith et al reproduced the signs of influenza in ferrets by the intra nasal injection of bacteria free garglings from cases of human epidemic influenza. The suspected virus aetiology was thus confirmed. This classic WS strain of the virus, and all subsequently isolated, serologically related strains were collectively designated the “influenza A” group of viruses. At least two other major serological groups have since been identified and these have been designated “B” and “C” respectively. Epidemiological studies have indicated that epidemic influenza, in its widespread form, is caused by viruses of the A group. 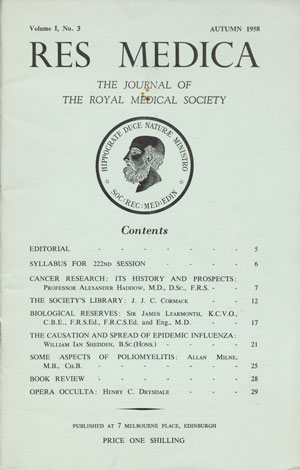 Res Medica is an Open Access journal. All material is licensed under a Creative Commons Attribution 4.0 International (CC BY 4.0) licence, unless otherwise stated.

Royal Medical Society
This journal is hosted by the University of Edinburgh Journal Hosting Service.