PUTRAJAYA: A CAPITAL FOR THE FUTURE

This essay attempts to move the definition of capital beyond its usual economic context and explore its meaning in two different but related senses of the word: the seat of government and an entity that is recognised as valuable. I refer to how capital is transformed within the Malaysian government’s Vision 2020 development initiative, specifically the Putrajaya project. Plans for the future sought to implement the ultimate objective of a ‘fully developed’ Malaysia by building a technologically equipped city that houses the Prime Minister and federal bureaucracy. This essay reviews the government’s perceptions of the future and wonders how the not yet is made known. I argue that despite plans, visions and ideas of imminence and glory, the future remains unfamiliar. As such, capital will continue to transform.
DOI: https://doi.org/10.2218/unfamiliar.v2i2.71 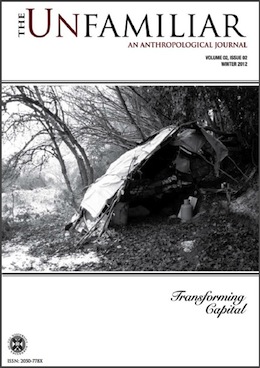 The Unfamiliar is an Open Access journal. All material is licensed under a Creative Commons Attribution-NonCommercial-ShareAlike 4.0 International (CC BY-NC-SA 4.0) licence, unless otherwise stated.

Social Anthropology at The University of Edinburgh