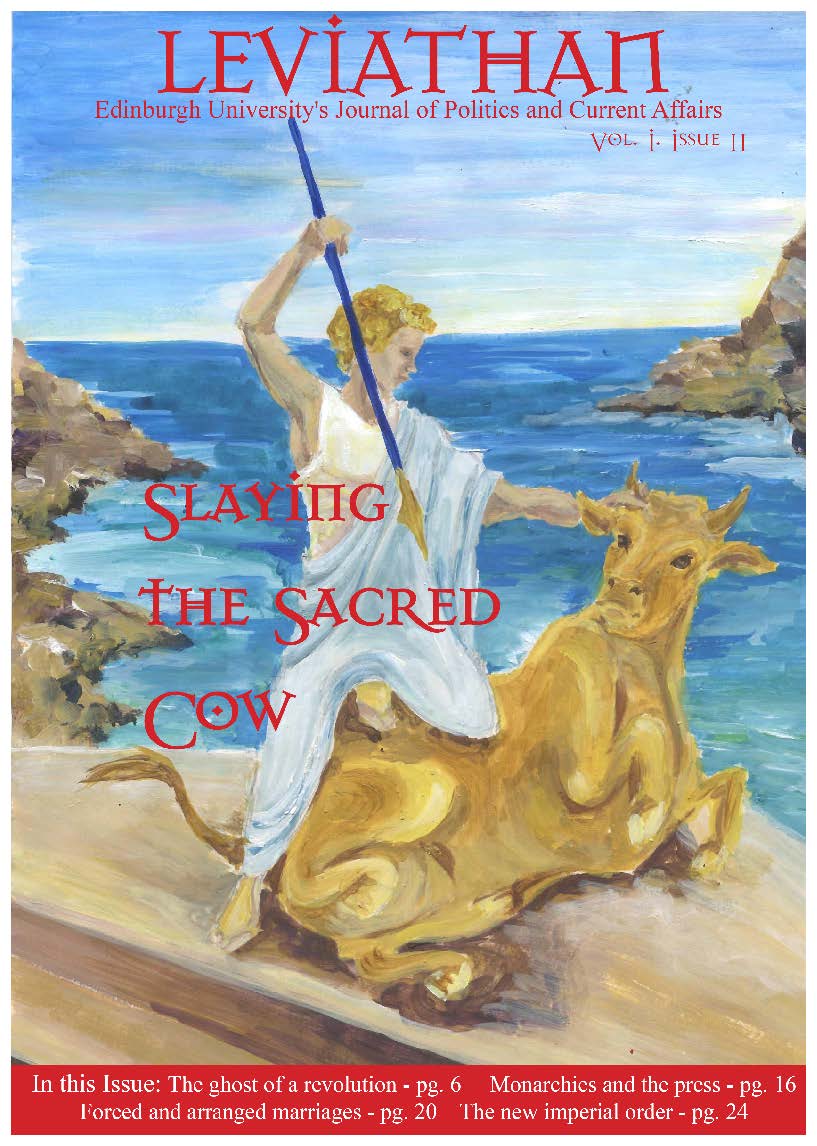 Welcome to the second installment of Leviathan. This release retains the broadness of our rst issue whilst exploring a new theme, the sacred cow. In the simplest terms a sacred cow is a subject seen by stakeholders as beyond criticism. Some topics covered in the following pages may not seem like sacred cows, yet, identifying a sacred cow is a subjective undertaking, in which the “sacredness” of a matter is in the eyes of the beholder. Thus, while some recognize Ronald Reagan as an ideological gure beyond reproach, his “sacredness” is questioned by others. In exploring the potentially undeserved reverence given to political institutions and individuals, we aim to generate a critical and normative approach to many politically relevant issues.

This release could not have come about without generous support from the Politics Society and its sponsors, the Department of Politics and International Relations and the Latin American Development and Cultural Apprecia- tion Society. However, while money may make the world go round, the most important contribution comes from Leviathan’s writers, and our hardworking staff, whose efforts have been instrumental. As always we urge readers to critically analyze the articles to follow by offering your opinions, concerns and comments. Letters to the editor may be sent to leviathan@eupolsoc.org.uk .

Thank you for your time and enjoy the read!

Leviathan’s success is in no small part a result of the hard work and dedication of the editorial team. Special thanks goes to Ryan Jacobs, Leviathan Editor-in-Chief, who did much of the initial spade work and laboured tirelessly to get the journal up and running. It seems like it was only yesterday that I was pushing for the Politics Society to launch its own journal, when I ran for Politics Society President. Since then the idea has grown and taken shape, thanks to Ryan’s hard work, and to the encouragement and help received from Professor Mark Aspinwall, head of the Department of Politics and International Relations.

With its second release, I trust that Leviathan will continue as the Society’s publication for many years to come and that it will go from strength to strength.

This journal is hosted by the University of Edinburgh Journal Hosting Service.